The previously announced 80% increase for November, has initially been extended to December, with the percentage that can be reclaimed for January through to March 2021 being confirmed at a later date. The Chancellor has however confirmed that the SEISS Grant will be increased to 80% from Nov - Jan, which makes me think it will be hard to not pay 80% for the furlough scheme in January also to align with this. This will mean that your employees can be on furlough in full for the months of November, and December or in part, by using flexible furlough.  Employees will be paid 80% of their usual wage for hours not worked, and there doesn't need to be any employer top up made. The claim system will remain the same and we can continue processing these on your behalf. The previous Job Support Scheme has been put on hold for the time being, and I have an illustration below that highlights the differences between the schemes. 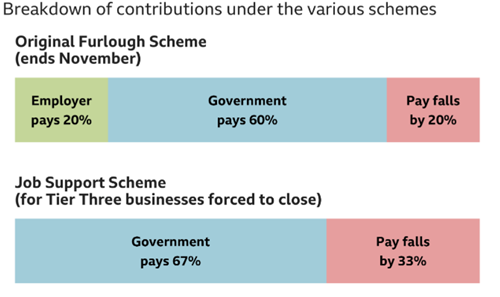 The grant is now being paid at 80% for November, December, January with the monthly cap of £2,500, this will be the same payout as the first grant, and you can claim it in the same way as before.You are eligible if you;

The scheme will be paid in one lump sum and the application portal will be open from 30th November.

Unbelievably after months of promising the furlough bonus of £1,000 payable as a bonus to employees that were furloughed at some point this year, but brought back to work, and paid a minimum of £520 per month between November and January.  This bonus payment was promised to be paid in February 2021. The chancellor has stated that this will be replaced with another 'Retention Incentive' in due course, when it is appropriate to do so.

The Government have promised to pay a £3,000 per month grant to any businesses that have been forced to close due to the restrictions, there was no mention of when this would end, if in line with the other support promised, this could be March 2021.

There has been updated guidance in relation to the bounceback loan.  If you failed to claim the full amount that you were entitled to in your first application for a bounceback loan, you are able to top this up in a second application. The amount you were allowed to claim had to be a reflection of your Pre-Covid turnover, you could apply for a loan at 25% of this value.

Emma has worked in finance for over 15 years, becoming a self-employed Bookkeeper 11 years ago, and training to become a Certified Accountant before launching B-Able in 2012.

Emma is dedicated to providing her clients with reliable business support.